In one week (around the corner!), my bestie, Rebecca, is marrying the best guy EVER (for her), Ryan. I’m her Matron of Honor (Side note: that title makes me feel OLD and, well, matronly… I prefer Goddess of the World, but whatever) so it’s my responsibility to co-hostess the bridal shower for this lovely lady. 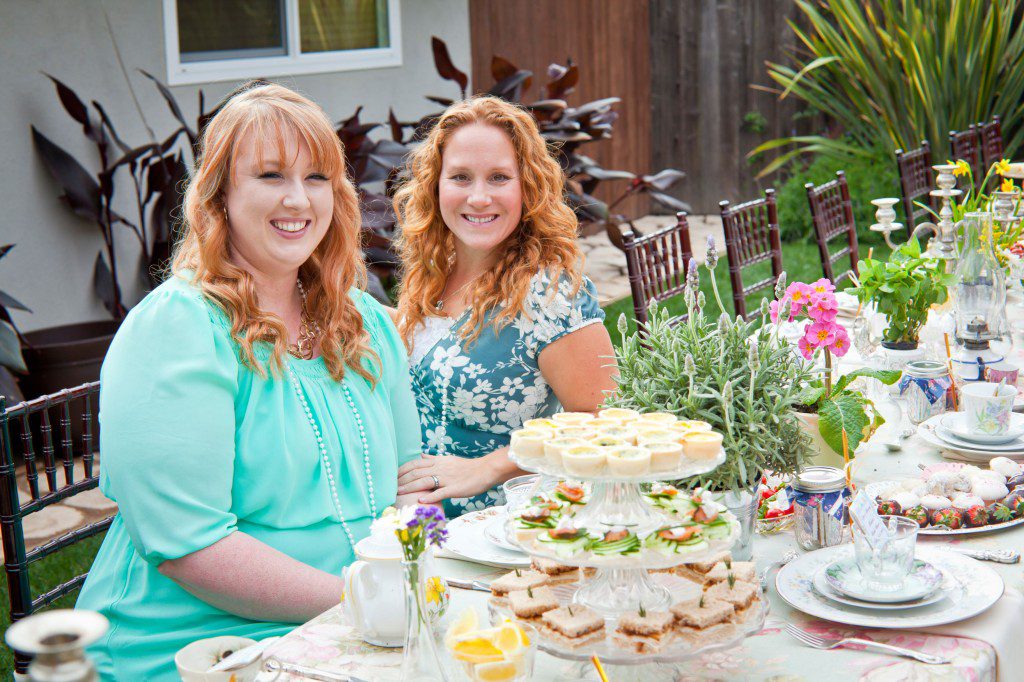 We held it at my home in the backyard and I wanted to do something more formal that we usually do (my house tends to be the landing pad for a lot of bridal & baby showers) so we went with a rustic, garden tea party theme. We didn’t want it to be TOO formal so we splashed in some mason jars, terra cotta pots, rust, and tarnished silver serving pieces.

My other bestie, Shawna, and I have been collecting the hodge-podge of china, serving dishes, trinkets and other knicknacks for MONTHS. We knew that they would all be perfect for the center of the huge feasting table that we envisioned. A perfect canvas for the brick-a-brack was La Tavola Linen‘s Maya Duckegg kings drape and we used the Tuscany Eggshell napkins for a soft compliment. We used mostly potted plants from our local nursery for pops of greenery, color & life. The fruitwood chiavari chairs from Simply Chiavari polished off the table. We adorned Rebecca’s and her mother’s chairs with a vintage linen hankerchief so the ladies-of-honor would know where to sit. I would have preferred assigned seating but, hey, we’re not THAT formal ’round here…

Each guest was told the theme ahead of time and encouraged to wear a garden-party-worthy dress and any fun accessories too. We offered faux pearl necklaces to work with their outfits. The favors were small mason jars with vintage fabric swatches (we found some at a yard sale) as decoration filled with custom tea bags and topped off with a locally-made honey stick.

The tea sandwiches were certainly Pinterest-worthy – beautiful AND delicious. Here are the recipes:

Method
NOTE: These will be open-faced sandwiches. Each slice of bread makes x4, 2-bite pieces.

Method
NOTE: These will be closed sandwiches. 2 slices of bread = x4, 2-bite pieces.

This was a wonderfully-fun afternoon and it couldn’t have turned out more beautifully for our lovely bride.

‘Tis the season to update your mailing list for those holiday cards, thank you notes for gifts, and to invite loved ones to your next amazing shin-dig, right? Here is a website that a friend turned me on to that could make your life VERY easy to keep all of that precious contact info in…

I was asked by my dear friend and colleague, Kelly Clark Leonard of Event of the Seasonto emcee a “battle of the bands” nonprofit fundraiser. The nonprofit organization was BASC – Bridging All Student Choices – and another event designer in town, Joni Papay of Hearts Bloom was the brains behind this wonderful event. The…

My dear friend’s sister, Kasey Kearin, married the love of her life, Skye Sander, on June 18th, 2010. I had the pleasure of working primarily with Kasey’s mom, Sharon, during the planning process. Sharon was very organized – leaving me to-do lists with each of the boxes of favors, menus, etc. The ceremony was held…

After visiting a few years earlier for a couples’ weekend, Michelle & Michael ended up back at Rolling Thunder Ranch nestled in the hills of Ojai for their April wedding weekend. They rented out the ranch and stayed for the best part of a week prepping for their destination wedding for their 80+ friends &…

The Community Counseling & Education Center celebrated its 25th anniversary with a gala fundraiser themed Dance with Us featuring a silent auction, dance exhibitions, catering by Elements Restaurant, and the rockin’ sounds of King Bee. It was a busy night of timing management, silent auction coordination, and communication between the dancers, band & everyone else!…

So you’ve asking your besties (and maybe that cousin who you love so much) to be your bridesmaids… And they said Yes! So the hunt is on for ONE dress style & color that fits anyone and everyone’s body type, right?! Ugh. What a pain. They’re itchy, they complain. Or your sorority sister Sandy doesn’t…